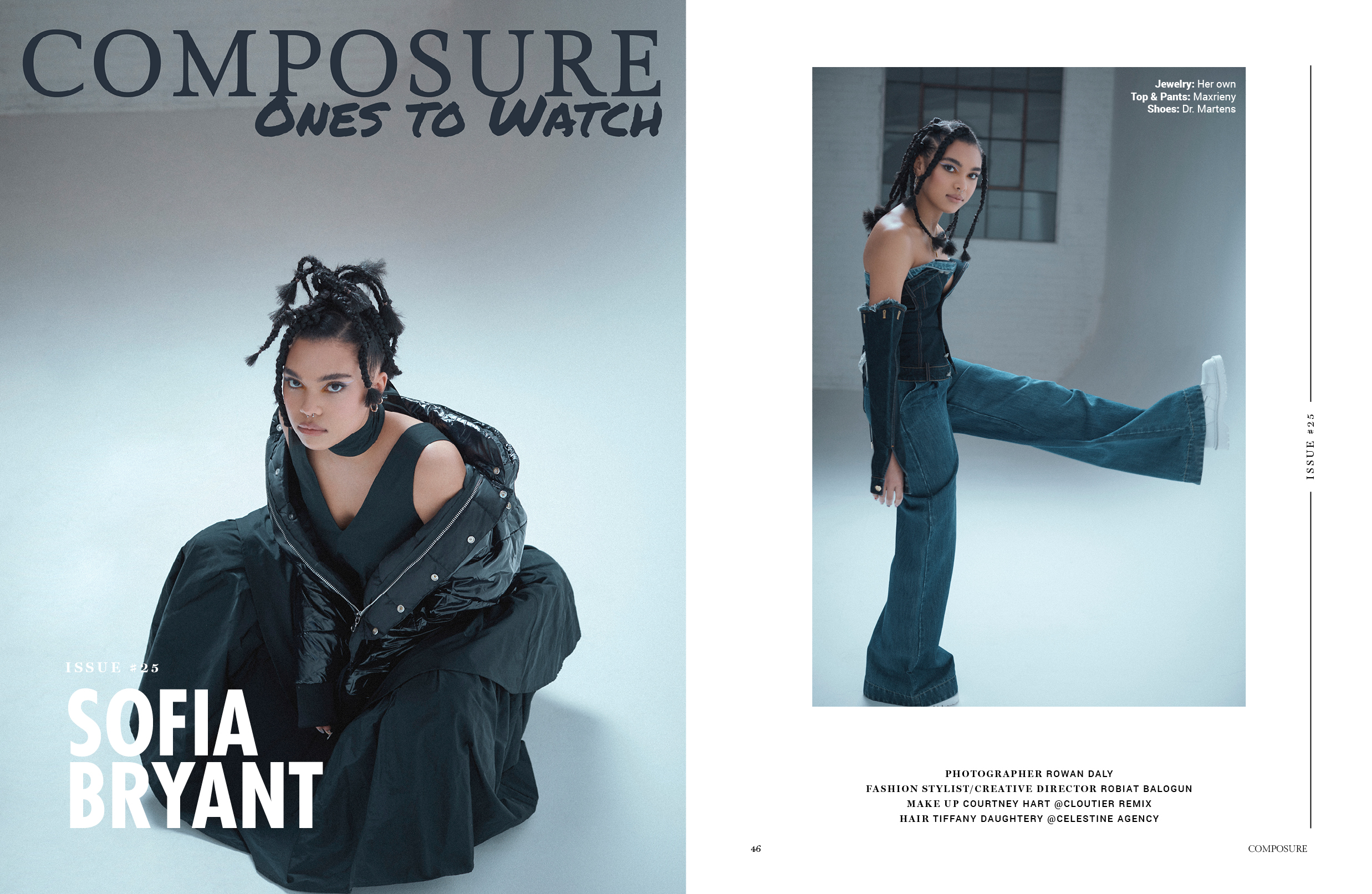 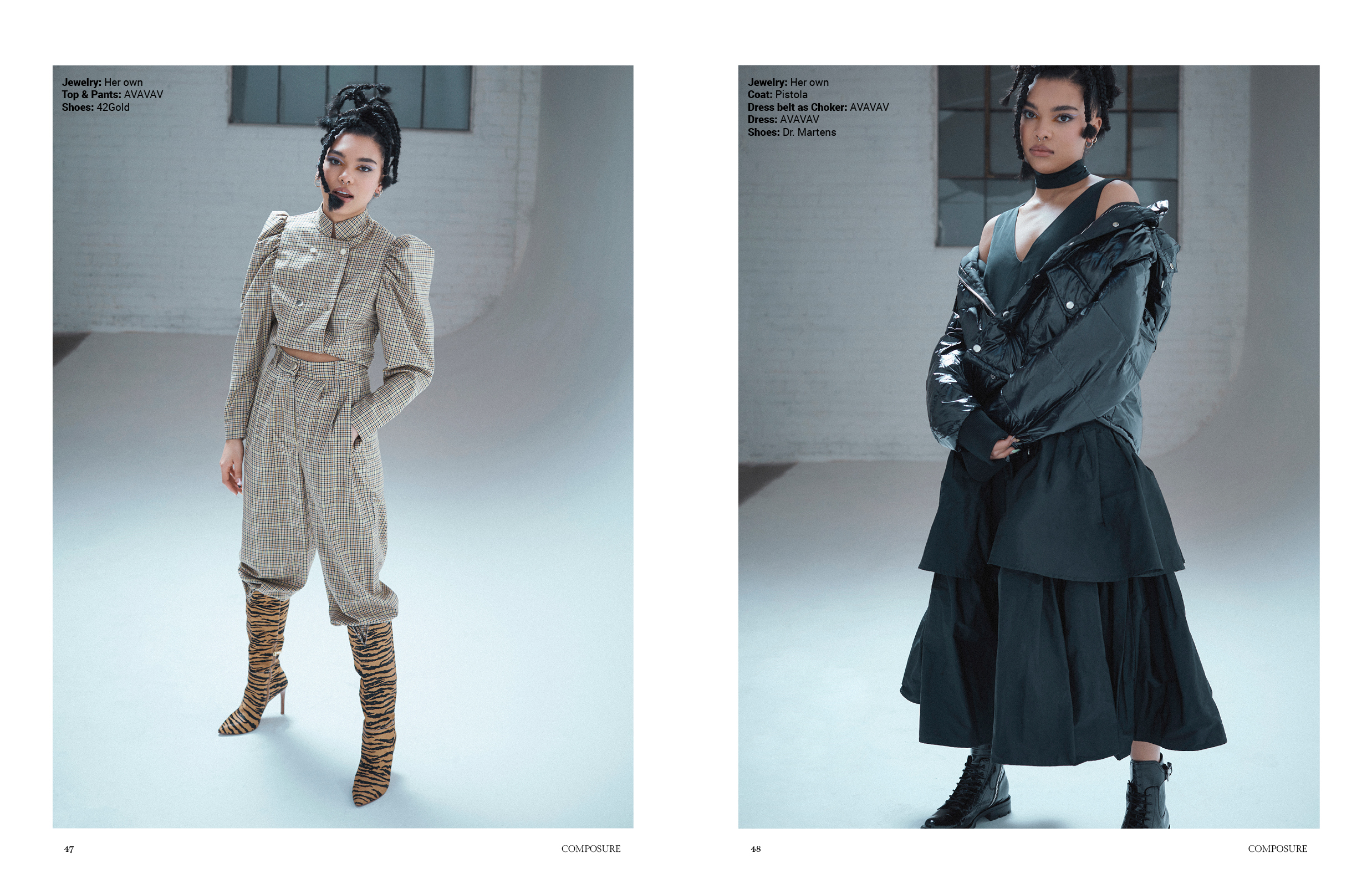 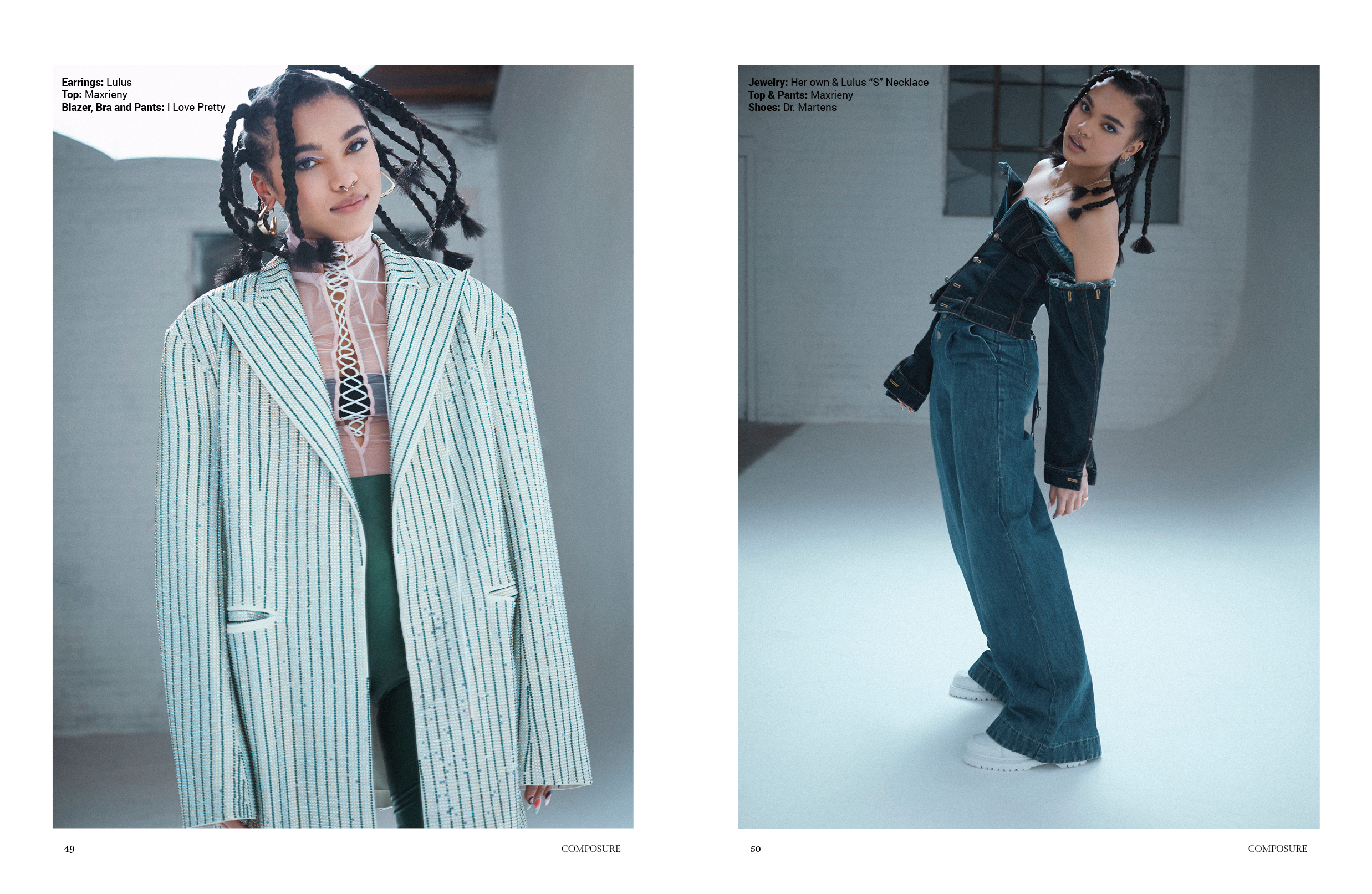 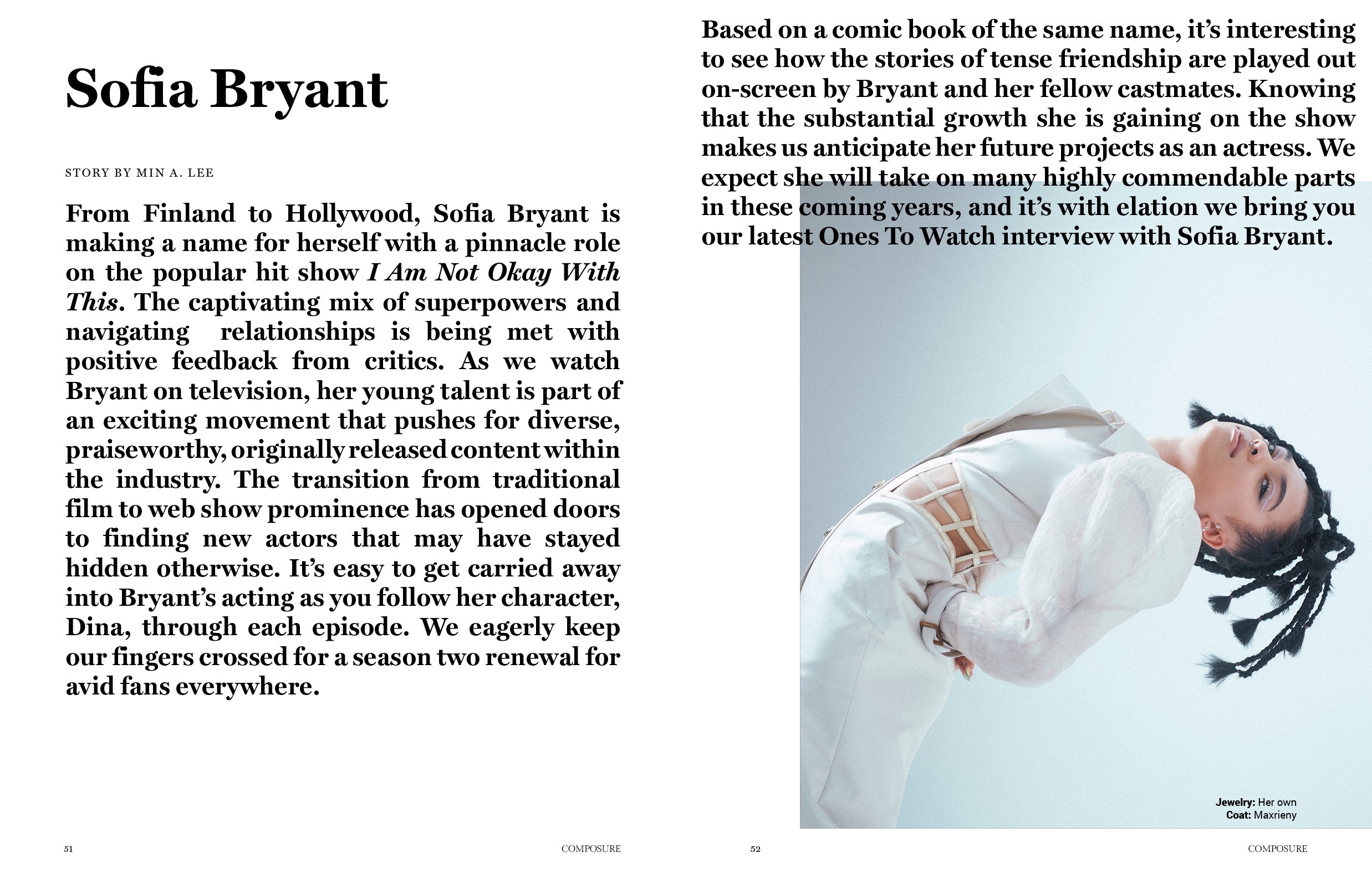 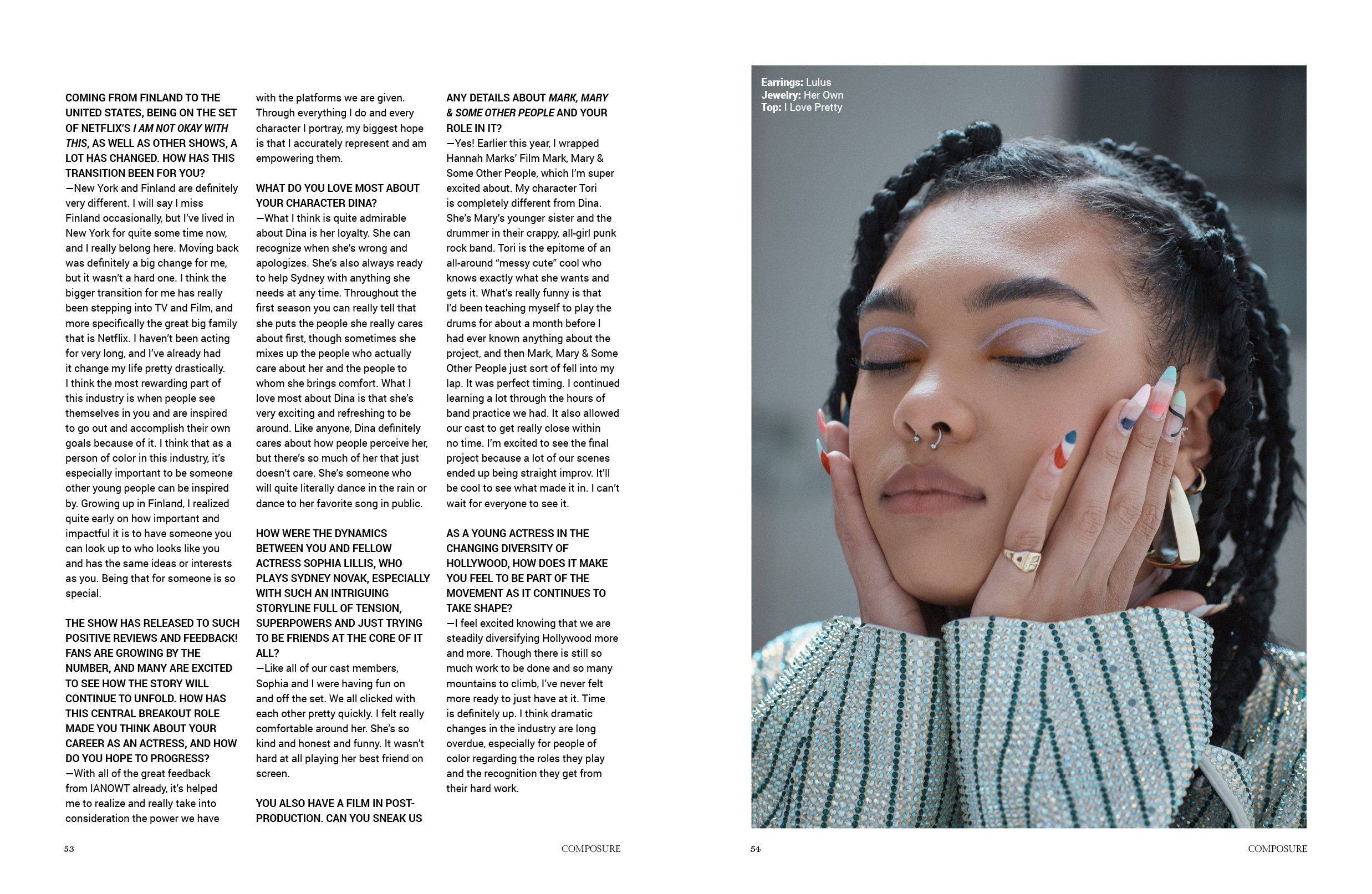 From Finland to Hollywood, Sofia Bryant is making a name for herself with a pinnacle role on the popular hit show I Am Not Okay With This. The captivating mix of superpowers and navigating  relationships is being met with positive feedback from critics. As we watch Bryant on television, her young talent is part of an exciting movement that pushes for diverse, praiseworthy, originally released content within the industry. The transition from traditional film to web show prominence has opened doors to finding new actors that may have stayed hidden otherwise. It’s easy to get carried away into Bryant’s acting as you follow her character, Dina, through each episode. We eagerly keep our fingers crossed for a season two renewal for avid fans everywhere.

Based on a comic book of the same name, it’s interesting to see how the stories of tense friendship are played out on-screen by Bryant and her fellow castmates. Knowing that the substantial growth she is gaining on the show makes us anticipate her future projects as an actress. We expect she will take on many highly commendable parts in these coming years, and it’s with elation we bring you our latest Ones To Watch interview with Sofia Bryant.

Coming from Finland to the United States, being on the set of Netflix’s I Am Not Okay With This, as well as other shows, a lot has changed. How has this transition been for you?

New York and Finland are definitely very different. I will say I miss Finland occasionally, but I’ve lived in New York for quite some time now, and I really belong here. Moving back was definitely a big change for me, but it wasn’t a hard one. I think the bigger transition for me has really been stepping into TV and Film, and more specifically the great big family that is Netflix. I haven’t been acting for very long, and I’ve already had it change my life pretty drastically. I think the most rewarding part of this industry is when people see themselves in you and are inspired to go out and accomplish their own goals because of it. I think that as a person of color in this industry, it’s especially important to be someone other young people can be inspired by. Growing up in Finland, I realized quite early on how important and impactful it is to have someone you can look up to who looks like you and has the same ideas or interests as you. Being that for someone is so special.

The show has released to such positive reviews and feedback! Fans are growing by the number, and many are excited to see how the story will continue to unfold. How has this central breakout role made you think about your career as an actress, and how do you hope to progress?

With all of the great feedback from IANOWT already, it’s helped me to realize and really take into consideration the power we have with the platforms we are given. Through everything I do and every character I portray, my biggest hope is that I accurately represent and am empowering them.

What do you love most about your character Dina?

What I think is quite admirable about Dina is her loyalty. She can recognize when she’s wrong and apologizes. She’s also always ready to help Sydney with anything she needs at any time. Throughout the first season you can really tell that she puts the people she really cares about first, though sometimes she mixes up the people who actually care about her and the people to whom she brings comfort. What I love most about Dina is that she’s very exciting and refreshing to be around. Like anyone, Dina definitely cares about how people perceive her, but there’s so much of her that just doesn’t care. She’s someone who will quite literally dance in the rain or dance to her favorite song in public.

How were the dynamics between you and fellow actress Sophia Lillis, who plays Sydney Novak, especially with such an intriguing storyline full of tension, superpowers and just trying to be friends at the core of it all?

Like all of our cast members, Sophia and I were having fun on and off the set. We all clicked with each other pretty quickly. I felt really comfortable around her. She’s so kind and honest and funny. It wasn’t hard at all playing her best friend on screen.

You also have a film in post-production. Can you sneak us any details about Mark, Mary & Some Other People and your role in it?

Yes! Earlier this year, I wrapped Hannah Marks’ Film Mark, Mary & Some Other People, which I’m super excited about. My character Tori is completely different from Dina. She’s Mary’s younger sister and the drummer in their crappy, all-girl punk rock band. Tori is the epitome of an all-around “messy cute” cool who knows exactly what she wants and gets it. What’s really funny is that I’d been teaching myself to play the drums for about a month before I had ever known anything about the project, and then Mark, Mary & Some Other People just sort of fell into my lap. It was perfect timing. I continued learning a lot through the hours of band practice we had. It also allowed our cast to get really close within no time. I’m excited to see the final project because a lot of our scenes ended up being straight improv. It’ll be cool to see what made it in. I can’t wait for everyone to see it.

As a young actress in the changing diversity of Hollywood, how does it make you feel to be part of the movement as it continues to take shape?

I feel excited knowing that we are steadily diversifying Hollywood more and more. Though there is still so much work to be done and so many mountains to climb, I’ve never felt more ready to just have at it. Time is definitely up. I think dramatic changes in the industry are long overdue, especially for people of color regarding the roles they play and the recognition they get from their hard work. 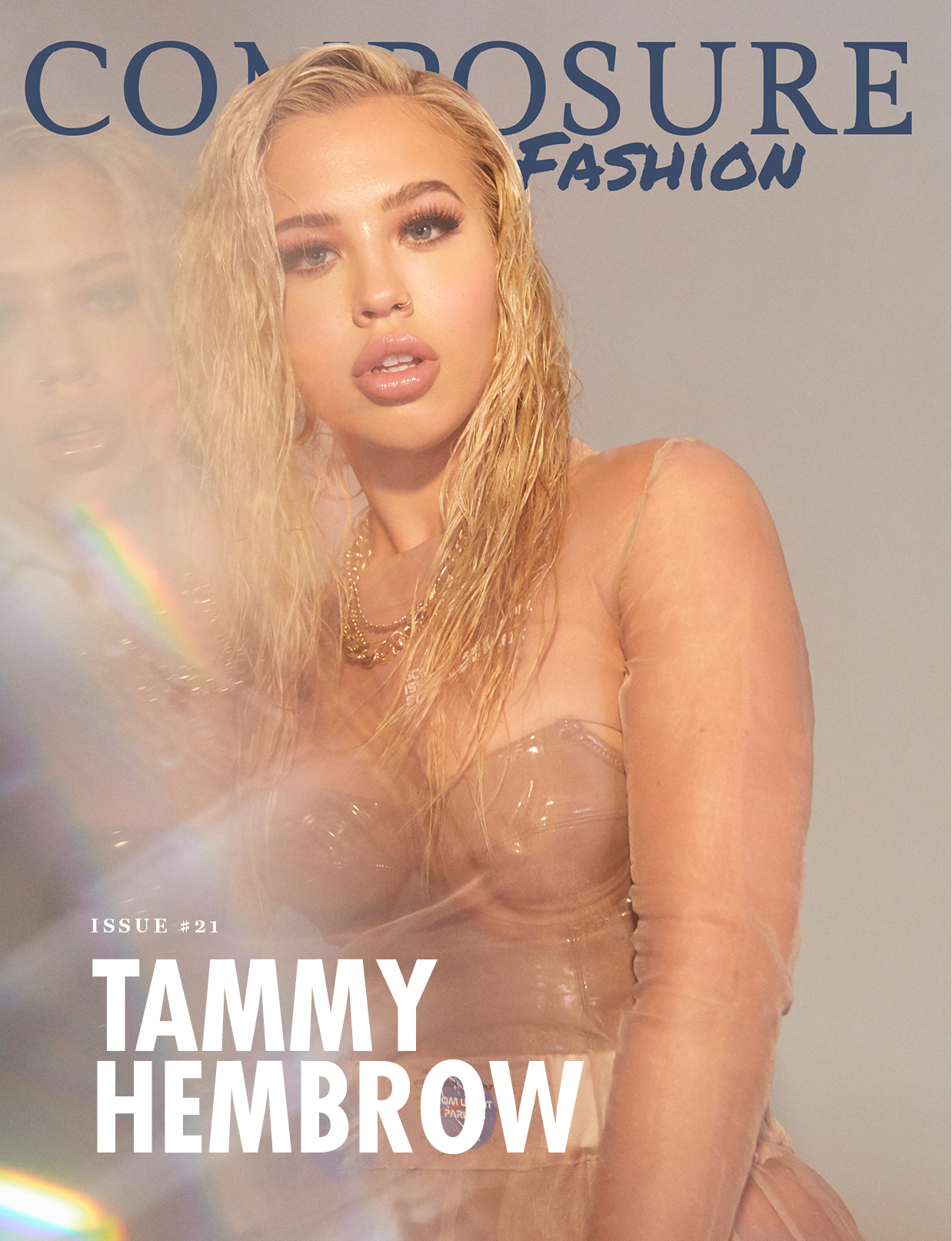