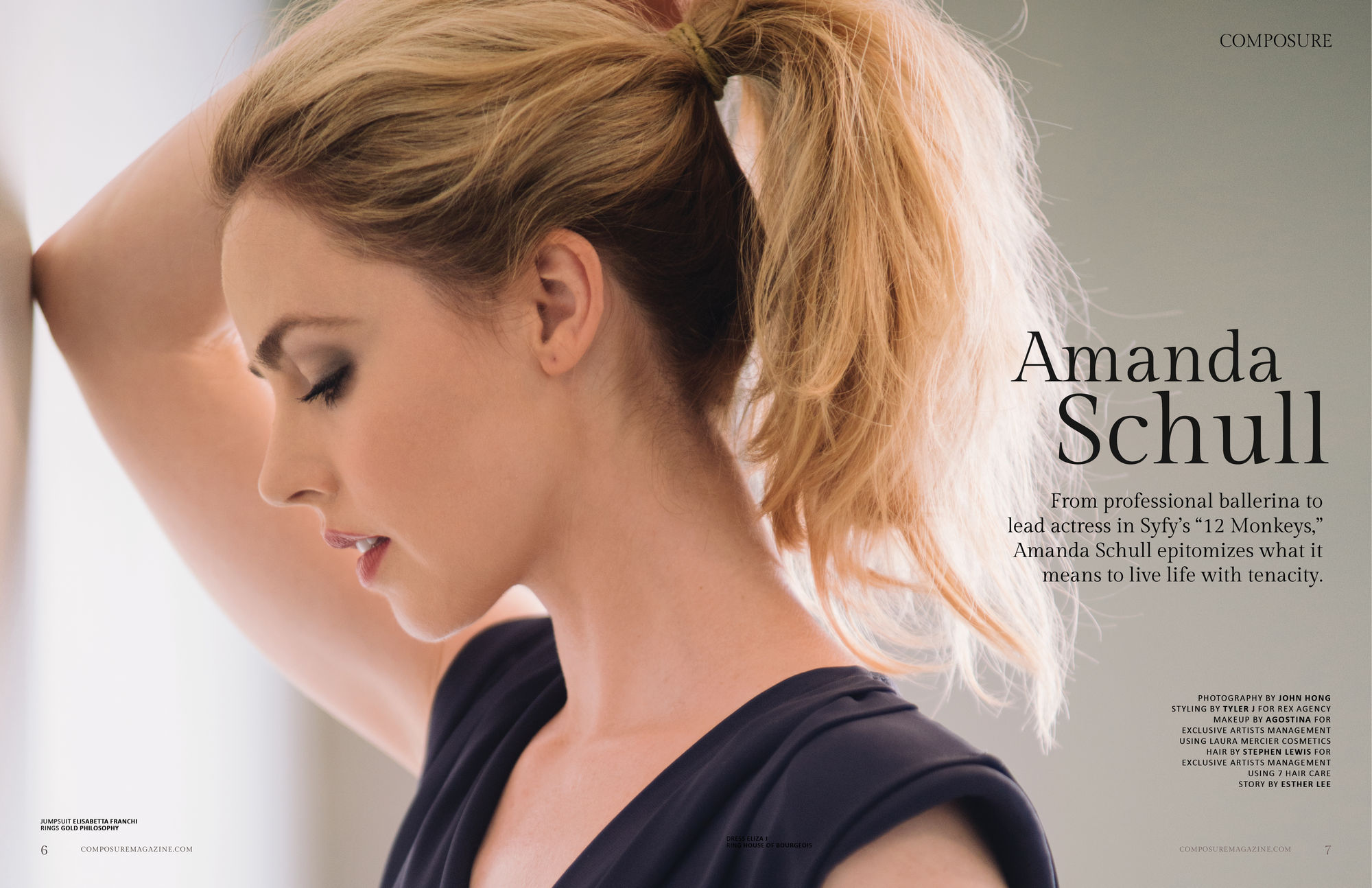 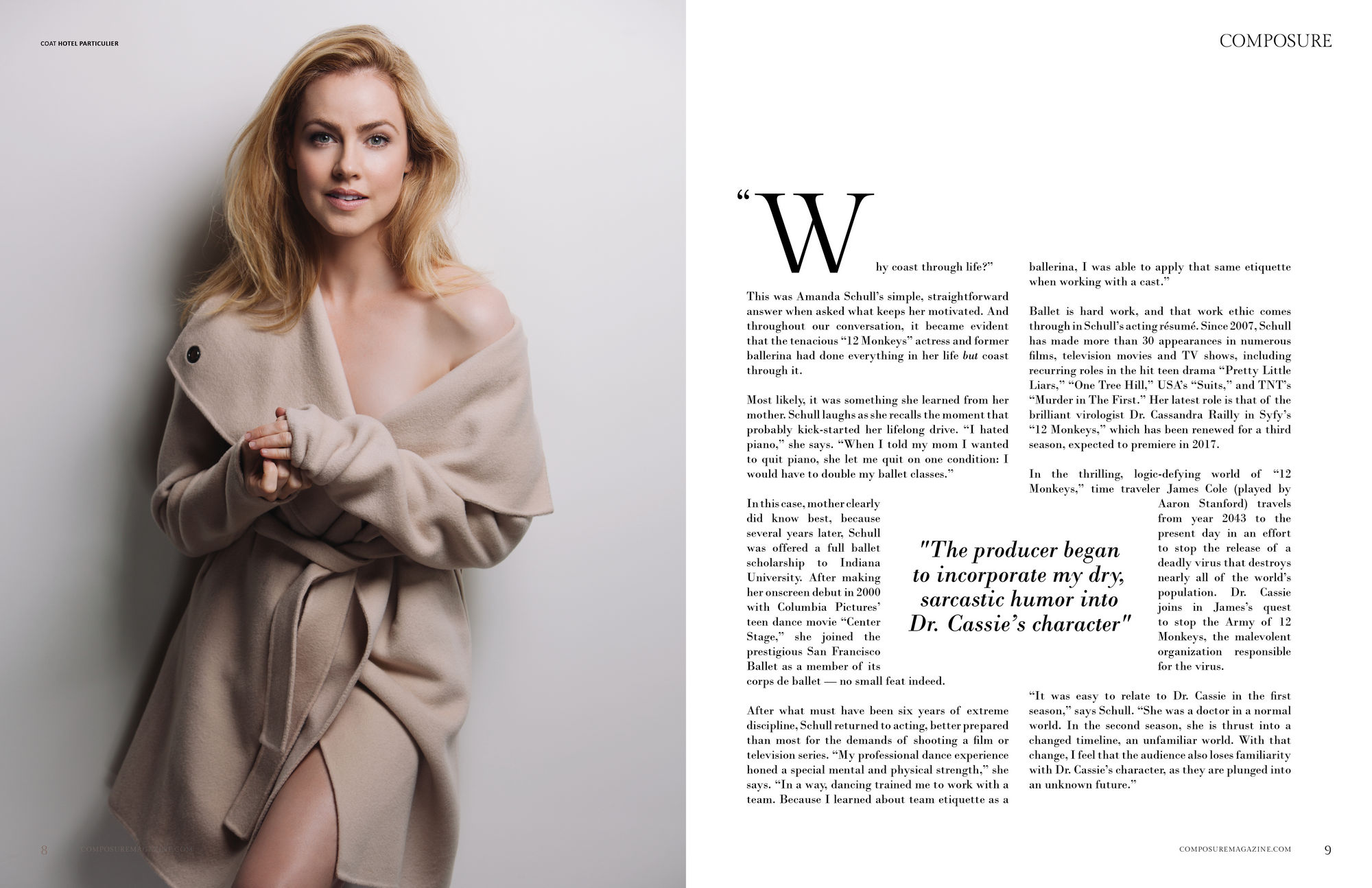 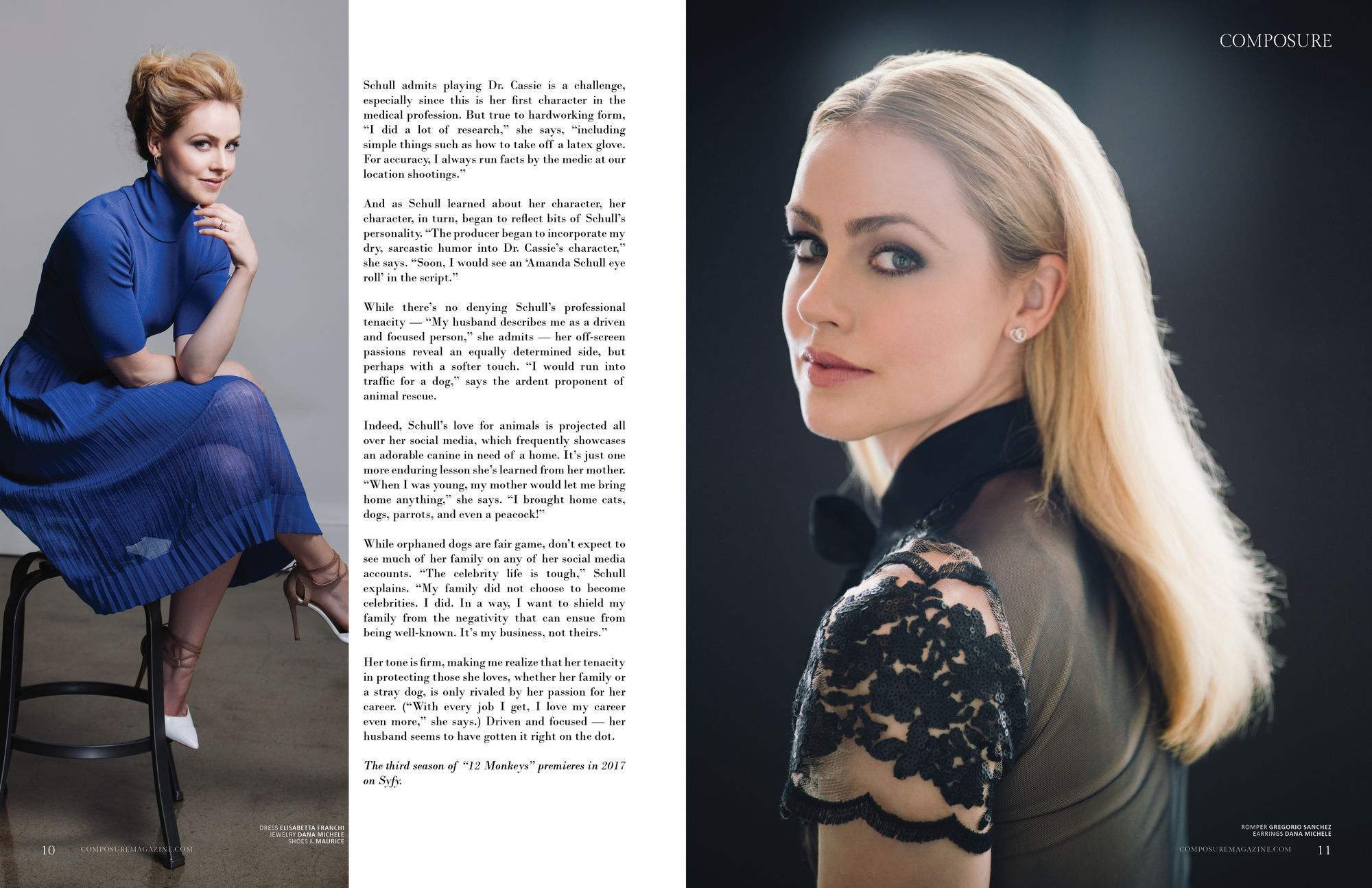 From professional ballerina to lead actress in Syfy’s “12 Monkeys,” Amanda Schull epitomizes what it means to live life with tenacity.

Why coast through life?”

This was Amanda Schull’s simple, straightforward answer when asked what keeps her motivated. And throughout our conversation, it became evident that the tenacious “12 Monkeys” actress and former ballerina had done everything in her life but coast through it.

Most likely, it was something she learned from her mother. Schull laughs as she recalls the moment that probably kick-started her lifelong drive. “I hated piano,” she says. “When I told my mom I wanted to quit piano, she let me quit on one condition: I would have to double my ballet classes.”

In this case, mother clearly did know best, because several years later, Schull was offered a full ballet scholarship to Indiana University. After making her onscreen debut in 2000 with Columbia Pictures’ teen dance movie “Center Stage,” she joined the prestigious San Francisco Ballet as a member of its corps de ballet — no small feat indeed.

After what must have been six years of extreme discipline, Schull returned to acting, better prepared than most for the demands of shooting a film or television series. “My professional dance experience honed a special mental and physical strength,” she says. “In a way, dancing trained me to work with a team. Because I learned about team etiquette as a ballerina, I was able to apply that same etiquette when working with a cast.”

Ballet is hard work, and that work ethic comes through in Schull’s acting résumé. Since 2007, Schull has made more than 30 appearances in numerous films, television movies and TV shows, including recurring roles in the hit teen drama “Pretty Little Liars,” “One Tree Hill,” USA’s “Suits,” and TNT’s “Murder in The First.” Her latest role is that of the brilliant virologist Dr. Cassandra Railly in Syfy’s “12 Monkeys,” which has been renewed for a third season, expected to premiere in 2017.

In the thrilling, logic-defying world of “12 Monkeys,” time traveler James Cole (played by Aaron Stanford) travels from year 2043 to the present day in an effort to stop the release of a deadly virus that destroys nearly all of the world’s population. Dr. Cassie joins in James’s quest to stop the Army of 12 Monkeys, the malevolent organization responsible for the virus.

“It was easy to relate to Dr. Cassie in the first season,” says Schull. “She was a doctor in a normal world. In the second season, she is thrust into a changed timeline, an unfamiliar world. With that change, I feel that the audience also loses familiarity with Dr. Cassie’s character, as they are plunged into an unknown future.”

Schull admits playing Dr. Cassie is a challenge, especially since this is her first character in the medical profession. But true to hardworking form, “I did a lot of research,” she says, “including simple things such as how to take off a latex glove. For accuracy, I always run facts by the medic at our location shootings.”

And as Schull learned about her character, her character, in turn, began to reflect bits of Schull’s personality. “The producer began to incorporate my dry, sarcastic humor into Dr. Cassie’s character,” she says. “Soon, I would see an ‘Amanda Schull eye roll’ in the script.”

While there’s no denying Schull’s professional tenacity — “My husband describes me as a driven and focused person,” she admits — her off-screen passions reveal an equally determined side, but perhaps with a softer touch. “I would run into traffic for a dog,” says the ardent proponent of animal rescue.

Indeed, Schull’s love for animals is projected all over her social media, which frequently showcases an adorable canine in need of a home. It’s just one more enduring lesson she’s learned from her mother. “When I was young, my mother would let me bring home anything,” she says. “I brought home cats, dogs, parrots, and even a peacock!”

While orphaned dogs are fair game, don’t expect to see much of her family on any of her social media accounts. “The celebrity life is tough,” Schull explains. “My family did not choose to become celebrities. I did. In a way, I want to shield my family from the negativity that can ensue from being well-known. It’s my business, not theirs.”

Her tone is firm, making me realize that her tenacity in protecting those she loves, whether her family or a stray dog, is only rivaled by her passion for her career. (“With every job I get, I love my career even more,” she says.) Driven and focused — her husband seems to have gotten it right on the dot. 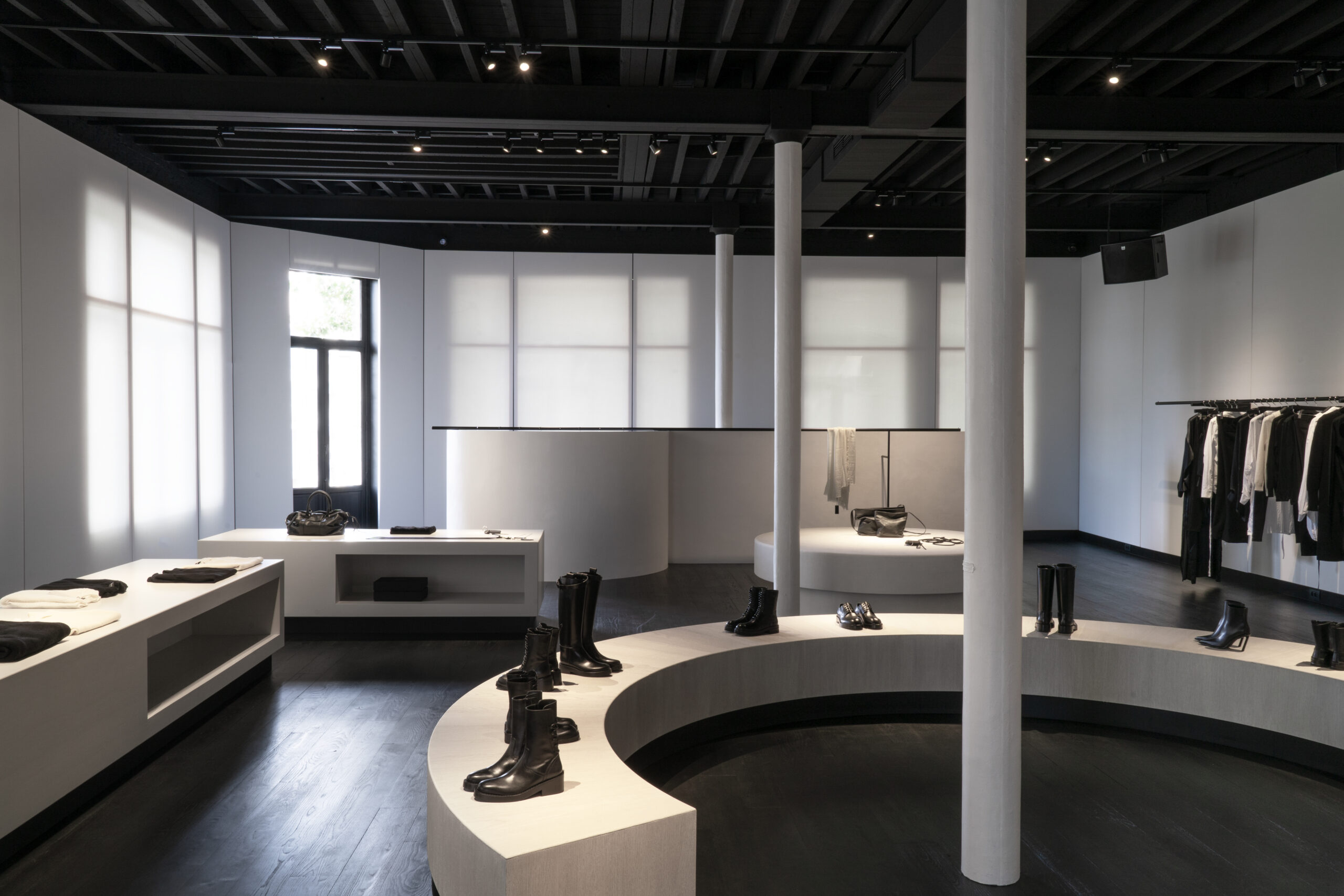