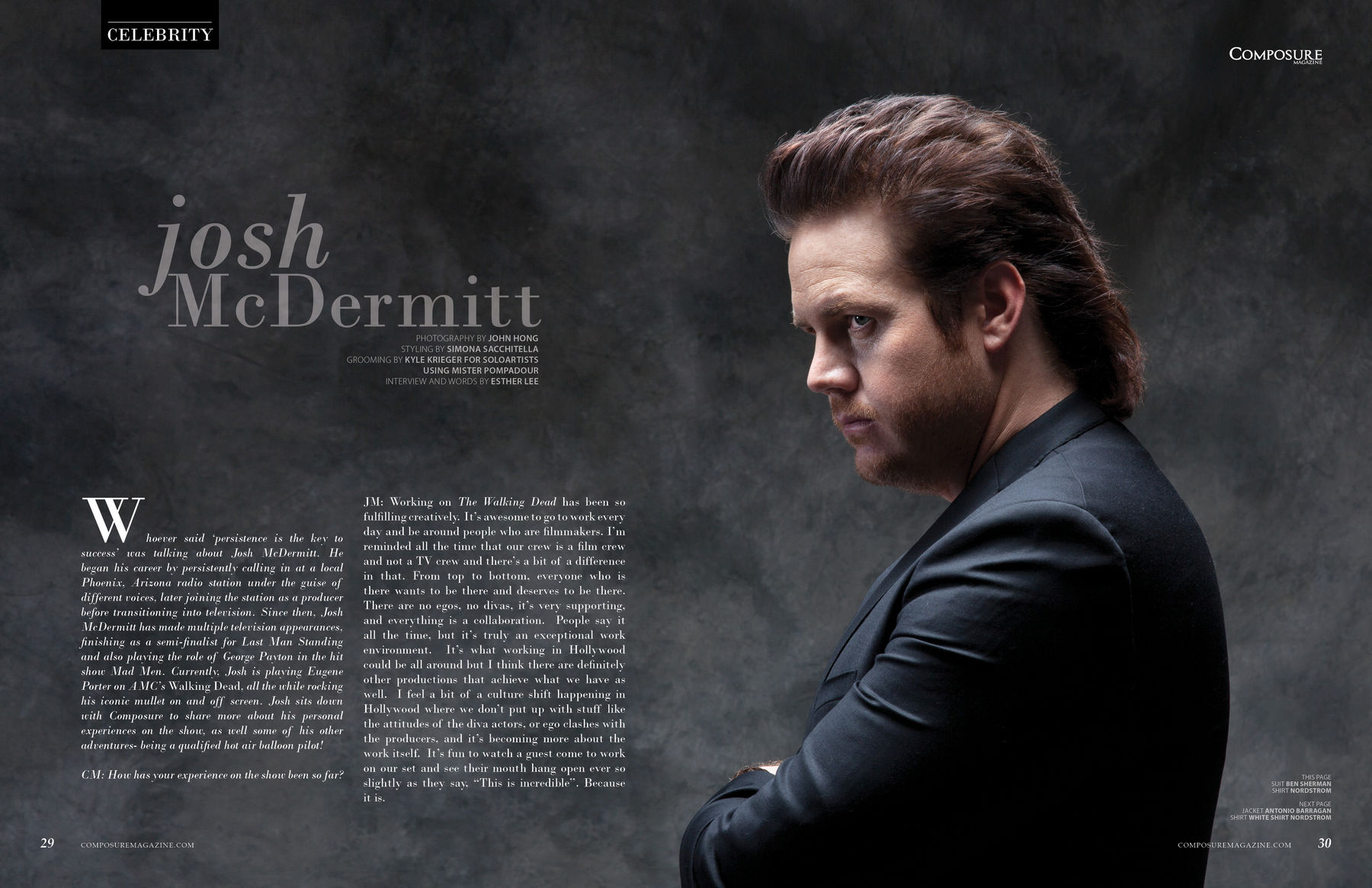 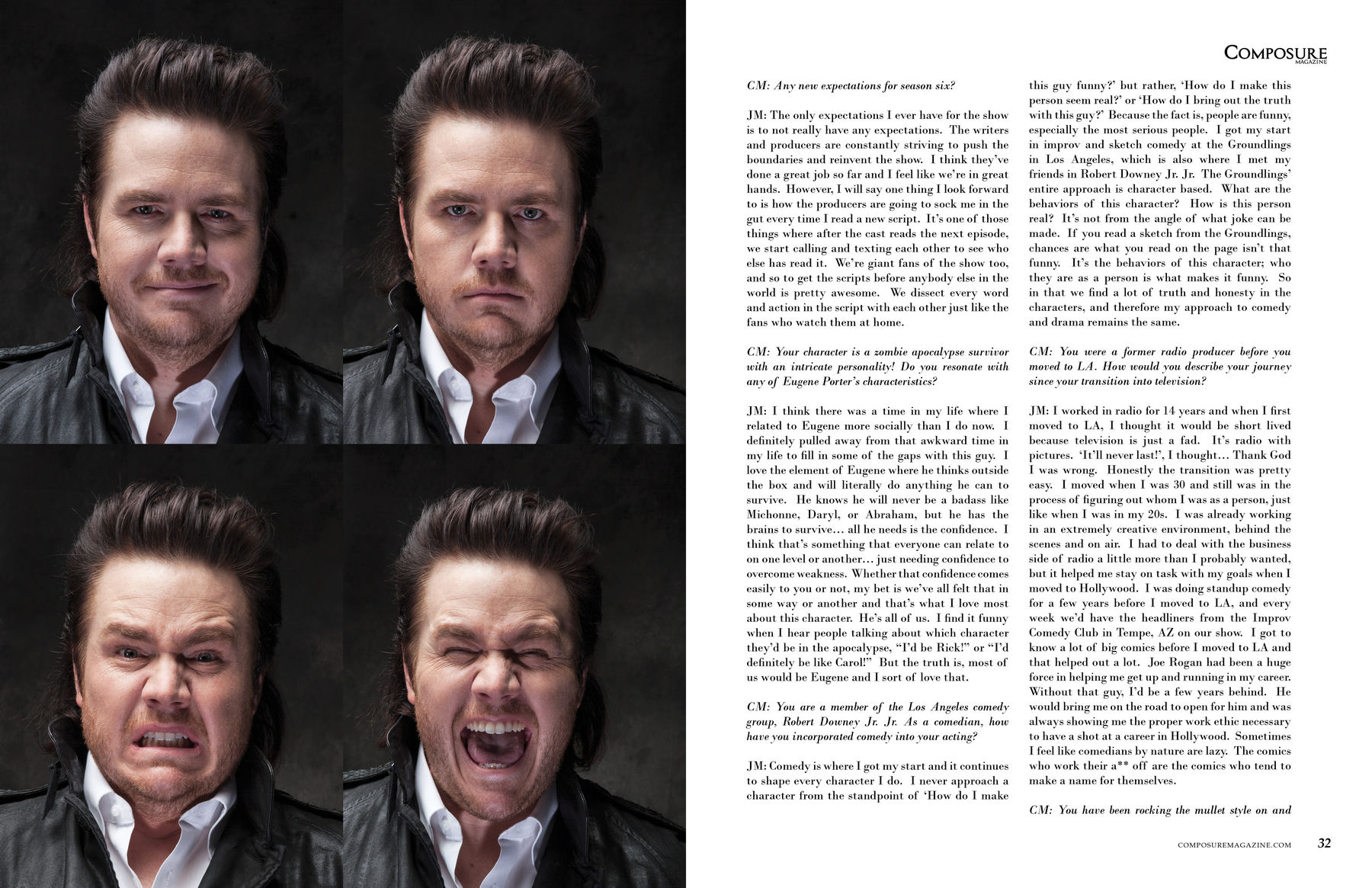 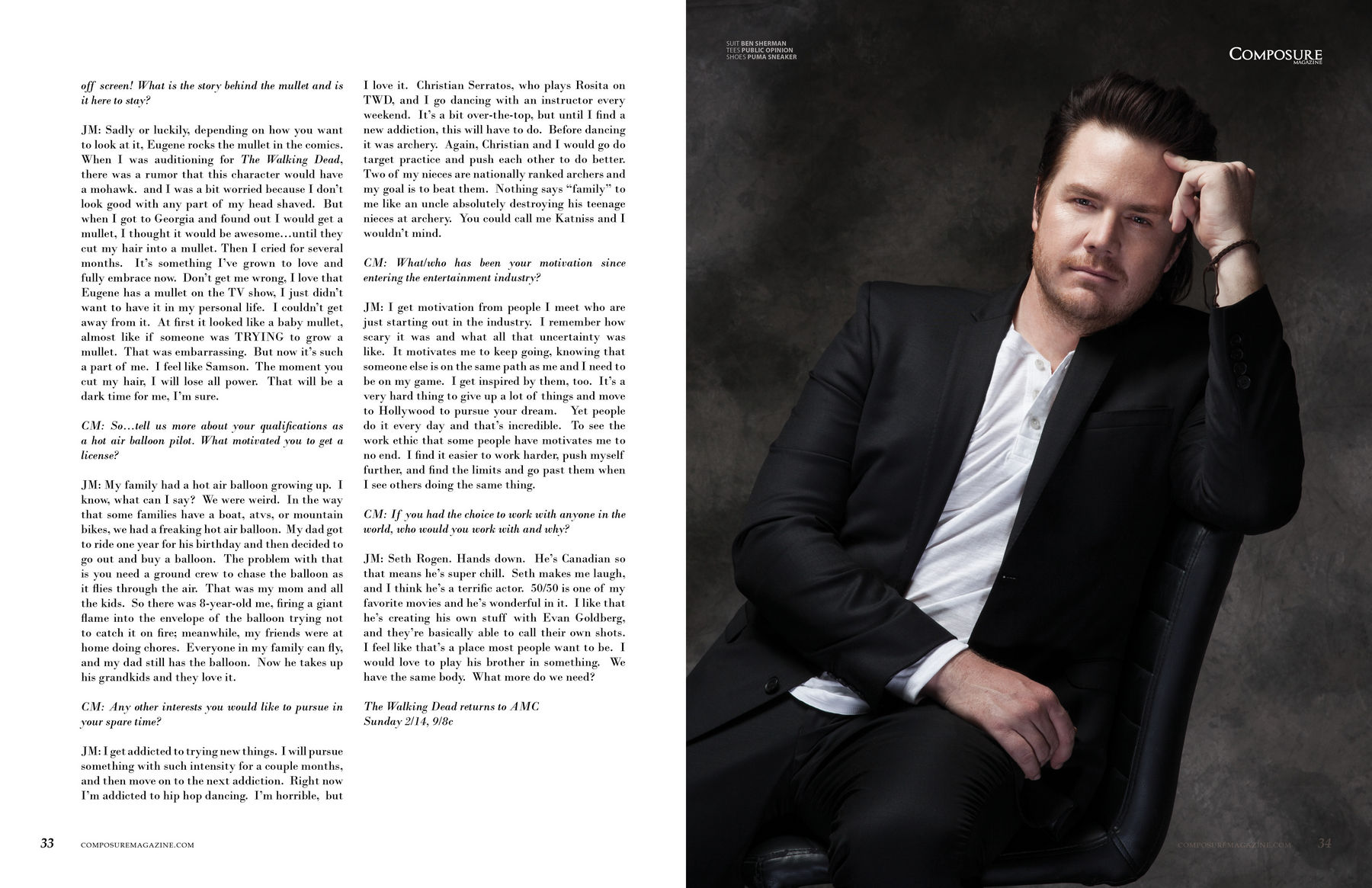 Whoever said ‘persistence is the key to success’ was talking about Josh McDermitt. He began his career by persistently calling in at a local Phoenix, Arizona radio station under the guise of different voices, later joining the station as a producer before transitioning into television. Since then, Josh McDermitt has made multiple television appearances, finishing as a semi-finalist for Last Man Standing and also playing the role of George Payton in the hit show Mad Men. Currently, Josh is playing Eugene Porter on AMC’s Walking Dead, all the while rocking his iconic mullet on and off screen. Josh sits down with Composure to share more about his personal experiences on the show, as well some of his other adventures- being a qualified hot air balloon pilot!

CM: How has your experience on the show been so far?

JM: Working on The Walking Dead has been so fulfilling creatively. It’s awesome to go to work every day and be around people who are filmmakers. I’m reminded all the time that our crew is a film crew and not a TV crew and there’s a bit of a difference in that. From top to bottom, everyone who is there wants to be there and deserves to be there. There are no egos, no divas, it’s very supporting, and everything is a collaboration. People say it all the time, but it’s truly an exceptional work environment. It’s what working in Hollywood could be all around but I think there are definitely other productions that achieve what we have as well. I feel a bit of a culture shift happening in Hollywood where we don’t put up with stuff like the attitudes of the diva actors, or ego clashes with the producers, and it’s becoming more about the work itself. It’s fun to watch a guest come to work on our set and see their mouth hang open ever so slightly as they say, “This is incredible”. Because it is.

JM: The only expectations I ever have for the show is to not really have any expectations. The writers and producers are constantly striving to push the boundaries and reinvent the show. I think they’ve done a great job so far and I feel like we’re in great hands. However, I will say one thing I look forward to is how the producers are going to sock me in the gut every time I read a new script. It’s one of those things where after the cast reads the next episode, we start calling and texting each other to see who else has read it. We’re giant fans of the show too, and so to get the scripts before anybody else in the world is pretty awesome. We dissect every word and action in the script with each other just like the fans who watch them at home.

CM: Your character is a zombie apocalypse survivor with an intricate personality! Do you resonate with any of Eugene Porter’s characteristics?

JM: I think there was a time in my life where I related to Eugene more socially than I do now. I definitely pulled away from that awkward time in my life to fill in some of the gaps with this guy. I love the element of Eugene where he thinks outside the box and will literally do anything he can to survive. He knows he will never be a badass like Michonne, Daryl, or Abraham, but he has the brains to survive… all he needs is the confidence. I think that’s something that everyone can relate to on one level or another… just needing confidence to overcome weakness. Whether that confidence comes easily to you or not, my bet is we’ve all felt that in some way or another and that’s what I love most about this character. He’s all of us. I find it funny when I hear people talking about which character they’d be in the apocalypse, “I’d be Rick!” or “I’d definitely be like Carol!” But the truth is, most of us would be Eugene and I sort of love that.

CM: You are a member of the Los Angeles comedy group, Robert Downey Jr. Jr. As a comedian, how have you incorporated comedy into your acting?

JM: Comedy is where I got my start and it continues to shape every character I do. I never approach a character from the standpoint of ‘How do I make this guy funny?’ but rather, ‘How do I make this person seem real?’ or ‘How do I bring out the truth with this guy?’ Because the fact is, people are funny, especially the most serious people. I got my start in improv and sketch comedy at the Groundlings in Los Angeles, which is also where I met my friends in Robert Downey Jr. Jr. The Groundlings’ entire approach is character based. What are the behaviors of this character? How is this person real? It’s not from the angle of what joke can be made. If you read a sketch from the Groundlings, chances are what you read on the page isn’t that funny. It’s the behaviors of this character; who they are as a person is what makes it funny. So in that we find a lot of truth and honesty in the characters, and therefore my approach to comedy and drama remains the same.

CM: You were a former radio producer before you moved to LA. How would you describe your journey since your transition into television?

JM: I worked in radio for 14 years and when I first moved to LA, I thought it would be short lived because television is just a fad. It’s radio with pictures. ‘It’ll never last!’, I thought… Thank God I was wrong. Honestly the transition was pretty easy. I moved when I was 30 and still was in the process of figuring out whom I was as a person, just like when I was in my 20s. I was already working in an extremely creative environment, behind the scenes and on air. I had to deal with the business side of radio a little more than I probably wanted, but it helped me stay on task with my goals when I moved to Hollywood. I was doing standup comedy for a few years before I moved to LA, and every week we’d have the headliners from the Improv Comedy Club in Tempe, AZ on our show. I got to know a lot of big comics before I moved to LA and that helped out a lot. Joe Rogan had been a huge force in helping me get up and running in my career. Without that guy, I’d be a few years behind. He would bring me on the road to open for him and was always showing me the proper work ethic necessary to have a shot at a career in Hollywood. Sometimes I feel like comedians by nature are lazy. The comics who work their a** off are the comics who tend to make a name for themselves.

CM: You have been rocking the mullet style on and off screen! What is the story behind the mullet and is it here to stay?

JM: Sadly or luckily, depending on how you want to look at it, Eugene rocks the mullet in the comics. When I was auditioning for The Walking Dead, there was a rumor that this character would have a mohawk. and I was a bit worried because I don’t look good with any part of my head shaved. But when I got to Georgia and found out I would get a mullet, I thought it would be awesome…until they cut my hair into a mullet. Then I cried for several months. It’s something I’ve grown to love and fully embrace now. Don’t get me wrong, I love that Eugene has a mullet on the TV show, I just didn’t want to have it in my personal life. I couldn’t get away from it. At first it looked like a baby mullet, almost like if someone was TRYING to grow a mullet. That was embarrassing. But now it’s such a part of me. I feel like Samson. The moment you cut my hair, I will lose all power. That will be a dark time for me, I’m sure.

CM: So…tell us more about your qualifications as a hot air balloon pilot. What motivated you to get a license?

JM: My family had a hot air balloon growing up. I know, what can I say? We were weird. In the way that some families have a boat, atvs, or mountain bikes, we had a freaking hot air balloon. My dad got to ride one year for his birthday and then decided to go out and buy a balloon. The problem with that is you need a ground crew to chase the balloon as it flies through the air. That was my mom and all the kids. So there was 8-year-old me, firing a giant flame into the envelope of the balloon trying not to catch it on fire; meanwhile, my friends were at home doing chores. Everyone in my family can fly, and my dad still has the balloon. Now he takes up his grandkids and they love it.

CM: Any other interests you would like to pursue in your spare time?

JM: I get addicted to trying new things. I will pursue something with such intensity for a couple months, and then move on to the next addiction. Right now I’m addicted to hip hop dancing. I’m horrible, but I love it. Christian Serratos, who plays Rosita on TWD, and I go dancing with an instructor every weekend. It’s a bit over-the-top, but until I find a new addiction, this will have to do. Before dancing it was archery. Again, Christian and I would go do target practice and push each other to do better. Two of my nieces are nationally ranked archers and my goal is to beat them. Nothing says “family” to me like an uncle absolutely destroying his teenage nieces at archery. You could call me Katniss and I wouldn’t mind.

CM: What/who has been your motivation since entering the entertainment industry?

JM: I get motivation from people I meet who are just starting out in the industry. I remember how scary it was and what all that uncertainty was like. It motivates me to keep going, knowing that someone else is on the same path as me and I need to be on my game. I get inspired by them, too. It’s a very hard thing to give up a lot of things and move to Hollywood to pursue your dream. Yet people do it every day and that’s incredible. To see the work ethic that some people have motivates me to no end. I find it easier to work harder, push myself further, and find the limits and go past them when I see others doing the same thing.

CM: If you had the choice to work with anyone in the world, who would you work with and why?

JM: Seth Rogen. Hands down. He’s Canadian so that means he’s super chill. Seth makes me laugh, and I think he’s a terrific actor. 50/50 is one of my favorite movies and he’s wonderful in it. I like that he’s creating his own stuff with Evan Goldberg, and they’re basically able to call their own shots. I feel like that’s a place most people want to be. I would love to play his brother in something. We have the same body. What more do we need?