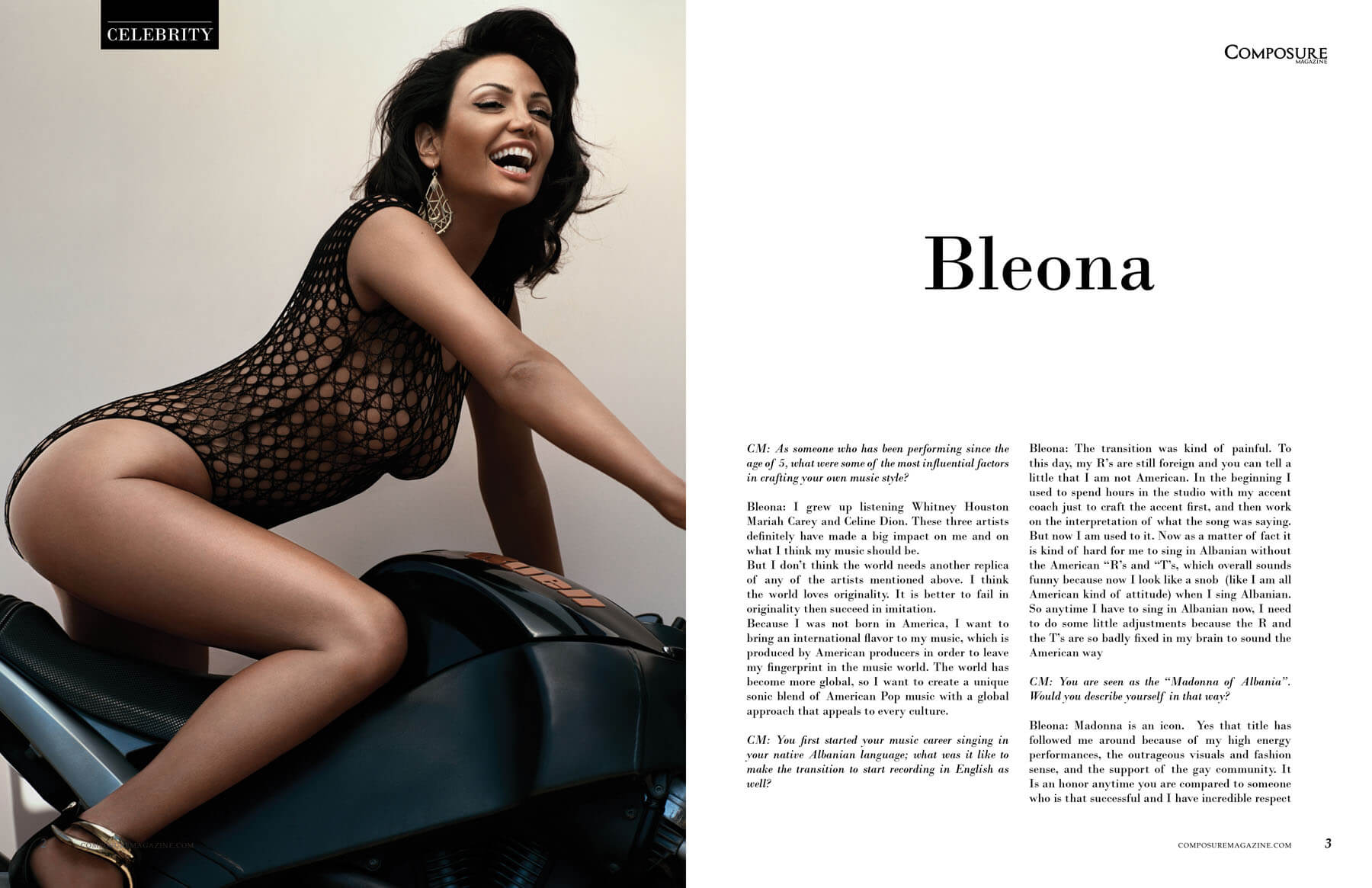 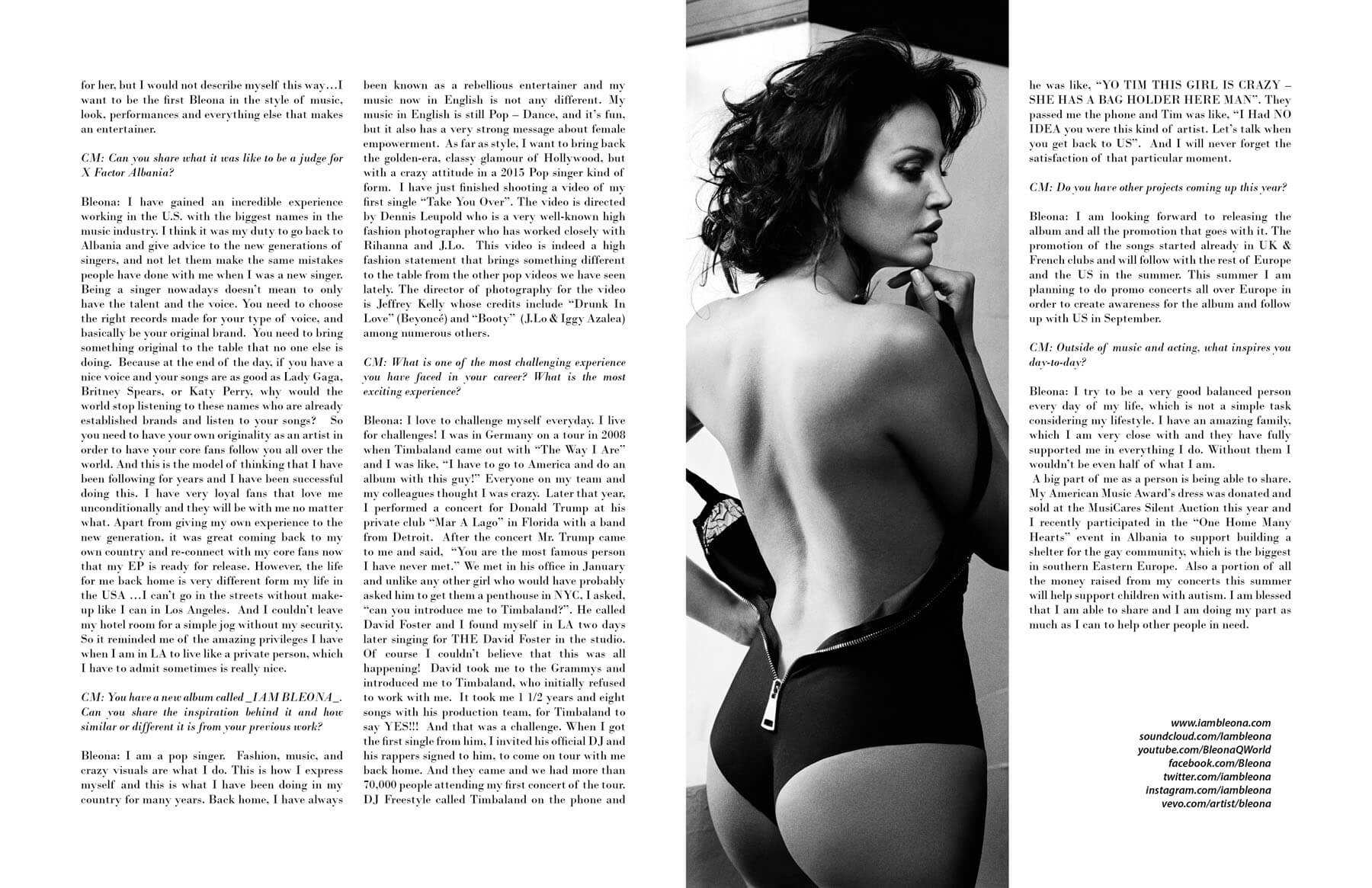 CM: As someone who has been performing since the age of 5, what were some of the most influential factors in crafting your own music style?

Bleona: I grew up listening Whitney Houston Mariah Carey and Celine Dion. These three artists definitely have made a big impact on me and on what I think my music should be.  But I don’t think the world needs another replica of any of the artists mentioned above. I think the world loves originality. It is better to fail in originality then succeed in imitation.  Because I was not born in America, I want to bring an international flavor to my music, which is produced by American producers in order to leave my fingerprint in the music world. The world has become more global, so I want to create a unique sonic blend of American Pop music with a global approach that appeals to every culture.

CM: You first started your music career singing in your native Albanian language; what was it like to make the transition to start recording in English as well?

Bleona: The transition was kind of painful. To this day, my R’s are still foreign and you can tell a little that I am not American. In the beginning I used to spend hours in the studio with my accent coach just to craft the accent first, and then work on the interpretation of what the song was saying. But now I am used to it. Now as a matter of fact it is kind of hard for me to sing in Albanian without the American “R’s and “T’s, which overall sounds funny because now I look like a snob  (like I am all American kind of attitude) when I sing Albanian. So anytime I have to sing in Albanian now, I need to do some little adjustments because the R and the T’s are so badly fixed in my brain to sound the American way

CM: You are seen as the “Madonna of Albania”. Would you describe yourself in that way?

Bleona: Madonna is an icon.  Yes that title has followed me around because of my high energy performances, the outrageous visuals and fashion sense, and the support of the gay community. It Is an honor anytime you are compared to someone who is that successful and I have incredible respect for her, but I would not describe myself this way…I want to be the first Bleona in the style of music, look, performances and everything else that makes an entertainer.

Bleona: I have gained an incredible experience working in the U.S. with the biggest names in the music industry. I think it was my duty to go back to Albania and give advice to the new generations of singers, and not let them make the same mistakes people have done with me when I was a new singer. Being a singer nowadays doesn’t mean to only have the talent and the voice. You need to choose the right records made for your type of voice, and basically be your original brand.  You need to bring something original to the table that no one else is doing.  Because at the end of the day, if you have a nice voice and your songs are as good as Lady Gaga, Britney Spears, or Katy Perry, why would the world stop listening to these names who are already established brands and listen to your songs?   So you need to have your own originality as an artist in order to have your core fans follow you all over the world. And this is the model of thinking that I have been following for years and I have been successful doing this. I have very loyal fans that love me unconditionally and they will be with me no matter what. Apart from giving my own experience to the new generation, it was great coming back to my own country and re-connect with my core fans now that my EP is ready for release. However, the life for me back home is very different form my life in the USA …I can’t go in the streets without make-up like I can in Los Angeles.  And I couldn’t leave my hotel room for a simple jog without my security.  So it reminded me of the amazing privileges I have when I am in LA to live like a private person, which I have to admit sometimes is really nice.

CM: You have a new album called _IAM BLEONA_. Can you share the inspiration behind it and how similar or different it is from your previous work?

Bleona: I am a pop singer.  Fashion, music, and crazy visuals are what I do. This is how I express myself and this is what I have been doing in my country for many years. Back home, I have always been known as a rebellious entertainer and my music now in English is not any different. My music in English is still Pop – Dance, and it’s fun, but it also has a very strong message about female empowerment.  As far as style, I want to bring back the golden-era, classy glamour of Hollywood, but with a crazy attitude in a 2015 Pop singer kind of form.  I have just finished shooting a video of my first single “Take You Over”. The video is directed by Dennis Leupold who is a very well-known high fashion photographer who has worked closely with Rihanna and J.Lo.  This video is indeed a high fashion statement that brings something different to the table from the other pop videos we have seen lately. The director of photography for the video is Jeffrey Kelly whose credits include “Drunk In Love” (Beyoncé) and “Booty”  (J.Lo & Iggy Azalea) among numerous others.

Bleona: I love to challenge myself everyday. I live for challenges! I was in Germany on a tour in 2008 when Timbaland came out with “The Way I Are” and I was like, “I have to go to America and do an album with this guy!” Everyone on my team and my colleagues thought I was crazy.  Later that year, I performed a concert for Donald Trump at his private club “Mar A Lago” in Florida with a band from Detroit.  After the concert Mr. Trump came to me and said,  “You are the most famous person I have never met.” We met in his office in January and unlike any other girl who would have probably asked him to get them a penthouse in NYC, I asked, “can you introduce me to Timbaland?”. He called David Foster and I found myself in LA two days later singing for THE David Foster in the studio. Of course I couldn’t believe that this was all happening!  David took me to the Grammys and introduced me to Timbaland, who initially refused to work with me.  It took me 1 1/2 years and eight songs with his production team, for Timbaland to say YES!!!  And that was a challenge. When I got the first single from him, I invited his official DJ and his rappers signed to him, to come on tour with me back home. And they came and we had more than 70,000 people attending my first concert of the tour. DJ Freestyle called Timbaland on the phone and he was like, “YO TIM THIS GIRL IS CRAZY – SHE HAS A BAG HOLDER HERE MAN”. They passed me the phone and Tim was like, “I Had NO IDEA you were this kind of artist. Let’s talk when you get back to US”.  And I will never forget the satisfaction of that particular moment.

CM: Do you have other projects coming up this year?

Bleona: I am looking forward to releasing the album and all the promotion that goes with it. The promotion of the songs started already in UK & French clubs and will follow with the rest of Europe and the US in the summer. This summer I am planning to do promo concerts all over Europe in order to create awareness for the album and follow up with US in September.

CM: Outside of music and acting, what inspires you day-to-day?

Bleona: I try to be a very good balanced person every day of my life, which is not a simple task considering my lifestyle. I have an amazing family, which I am very close with and they have fully supported me in everything I do. Without them I wouldn’t be even half of what I am.

A big part of me as a person is being able to share. My American Music Award’s dress was donated and sold at the MusiCares Silent Auction this year and I recently participated in the “One Home Many Hearts” event in Albania to support building a shelter for the gay community, which is the biggest in southern Eastern Europe.  Also a portion of all the money raised from my concerts this summer will help support children with autism. I am blessed that I am able to share and I am doing my part as much as I can to help other people in need. 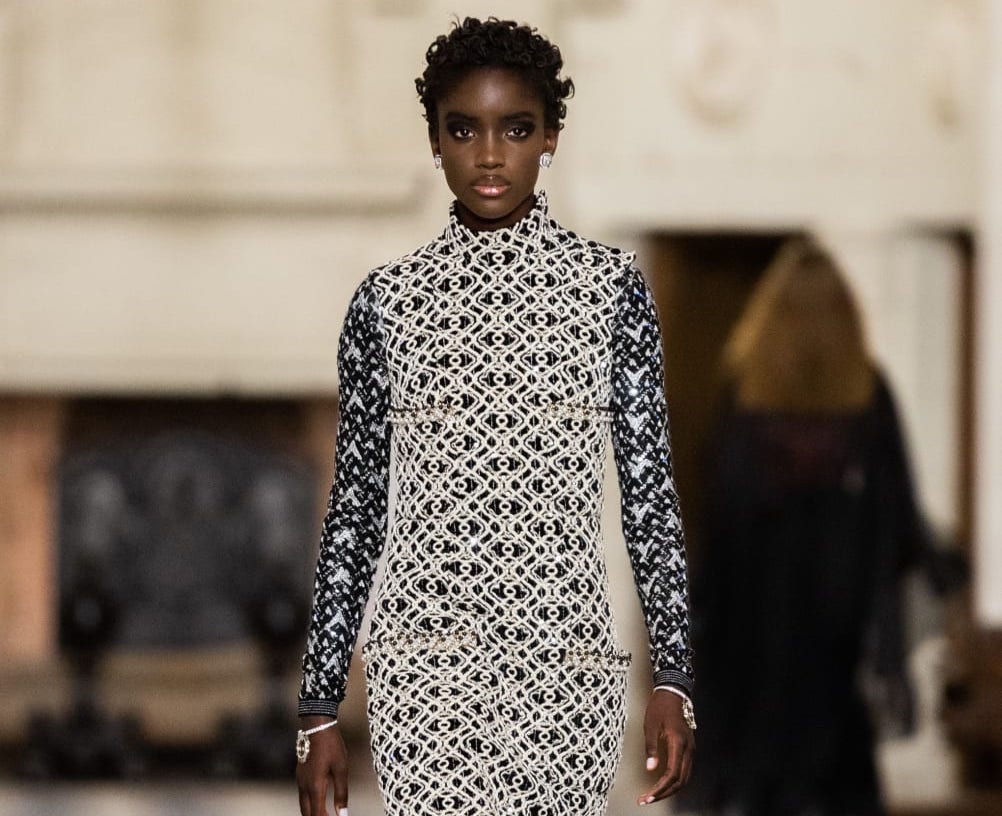 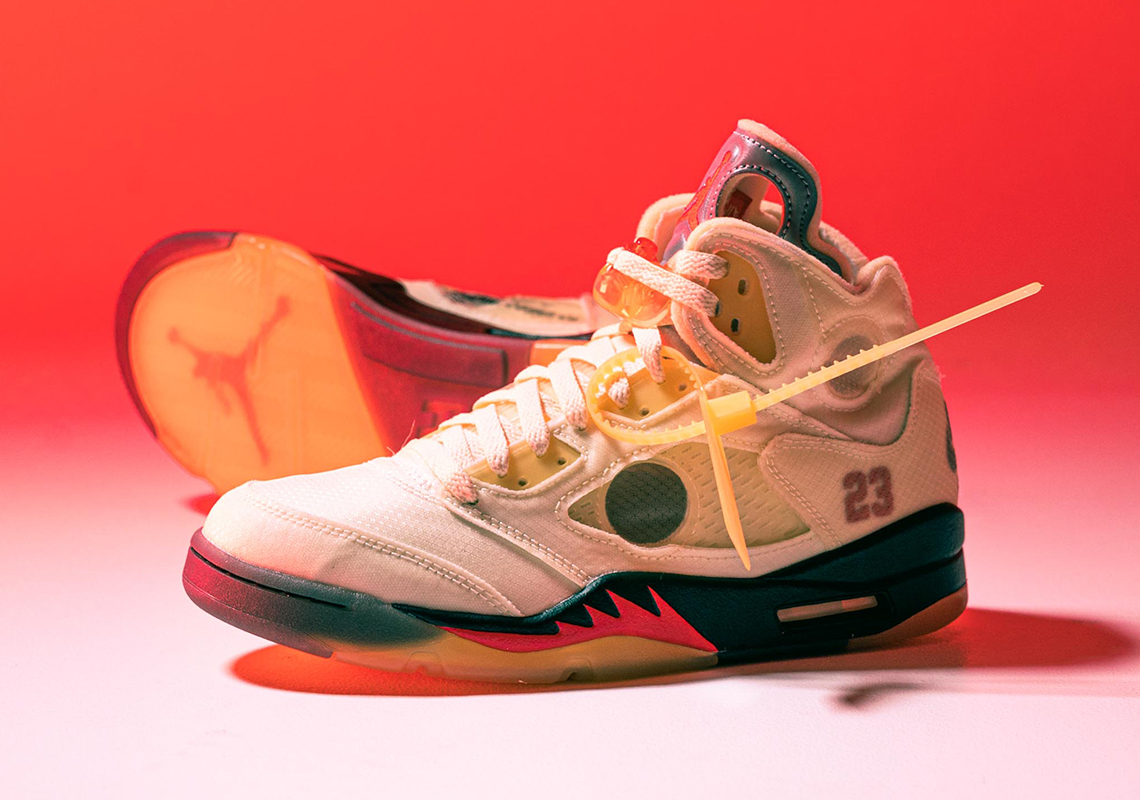